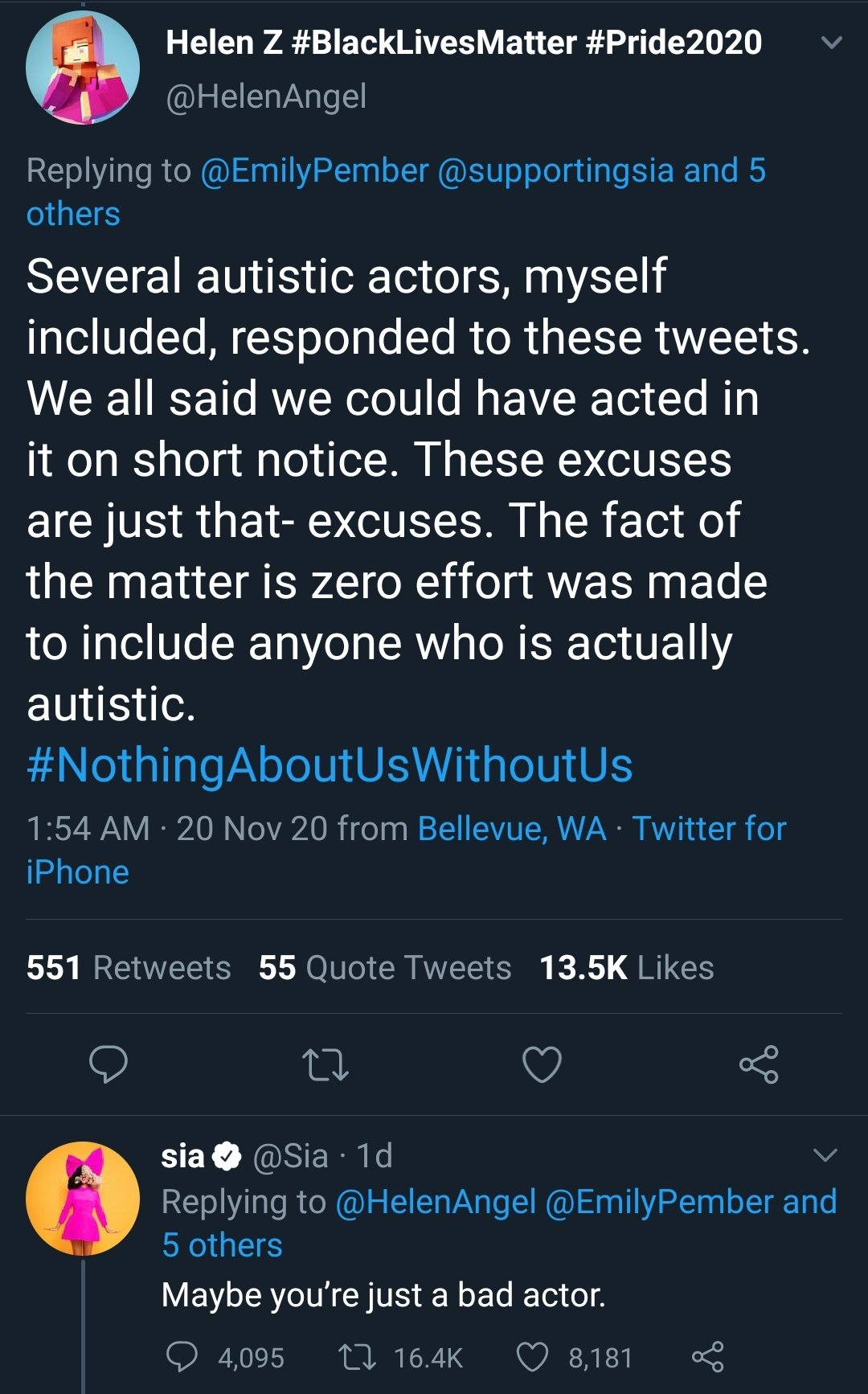 Sia, having a ~*completely healthy and proportional response*~ to criticism of her work.

Sia cast a non-disabled, non-autistic actress to play a non-verbal, autistic character. The practice of casting non-disabled actors to play disabled characters is known as “cripping up.”

Everyone makes mistakes. But if Music is a mistake, it’s one Sia put a lot of thought, time, and money into making. She wrote the screenplay for Maddie Ziegler and defended the choice to not accommodate autistic actors on her set. And it’s not that autistic actors can’t work on demanding schedules – Sir Anthony Hopkins, anyone?

Disability cannot be acted. It can only be mimicked or mocked.

Filmmakers can avoid abusing disabled people in the future by doing a few simple things when casting for a disabled character:

I’ve said it before and I’ll end the thread on this note:

You cannot ACT disabled. Your body either does those things or it doesn’t. It’s not an emotion, an essence, a character, or a feeling to convey. Acting is for THOSE things.

You don’t act out a disability. That’s mimicry.

After watching the trailer, I can’t call Ziegler’s performance “acting.” It’s mockery. It looks like a high school mean girl making fun of a disabled classmate. Ziegler literally reminds me of my high school theatre classmates creating disabled characters and playing them with stereotyped hand and facial movements. It’s the kind of performance that either of those women would be mortified by and deeply ashamed of now, if recordings were to surface. But this is 2020, not 2006, and those were suburban skits, not a Hollywood production.

To Ziegler’s credit, she expressed discomfort about the role, even cried on set at the thought that people would think she is making fun of them. Clearly, there’s a power imbalance between Sia and Ziegler, who was a child when Sia began writing the script for Music. And Sia tried to reassure her that she would protect her from criticism and everything would be all right.

Okay fck this
Maddie was deeply upset about this from go. Didn’t want anyone to think she was making fun of them or doing something wrong. Cried to 2 adults, who told her they’d NEVER let that happen bc they knew it was okay.

She tried to tell you.

But you “made this for her”. pic.twitter.com/foKitwKevD

Sia claims that she “researched” for the film, but that story falls apart with even a cursory Google search. Depending on your location, your top Google search suggestions for “Autism Speaks” might include terms like “Autism Speaks backlash” or “Autism speaks ableist” or “Autism Speaks hate group” – not exactly the kind of thing that inspires confidence for a partnership on a film which you intend as a “love letter” to autistic people (see the full thread here).

Autistic perspectives were not centered in Music

Sia did not consult with autistic people on this project, despite her claims that she put three years of research into the film. A cursory Google search or look around Twitter would reveal that Autism Speaks (which has no autistic people on its board) is regarded by many autistic people as a hate group, and that we suggest everyone seek out autistic-led organizations like the Autistic Self Advocacy Network (ASAN) or Autistic Women and Nonbinary Network (AWN). The #ActuallyAutistic hashtag on Twitter is a lively community in which you can find autistic people from all walks of life including journalists, content creators, actors, musicians, dancers, and artists who would have been happy to consult on a Hollywood project.

Her claim that she “researched” autism sounds like COVID deniers and Qanon believers urging you to “do your own research” by watching dubious YouTube videos. Which brings me to how Maddie Ziegler prepared for her eponymous role: by watching videos of autistic children made without their consent.

Meltdown videos are a violation of privacy and consent

Recall one of the worst things that ever happened to you. Now think about how you react to that amount of stress when your batteries are completely drained. Do you want the most powerful people in your life capturing those events on video and broadcasting your reaction to the world? Would that make you feel good about yourself?

If a movie were to be made about your life, would you want the actor playing you to base their performance on videos of times when you were so stressed out that you lost control of yourself?

Would you want the world to form their opinions of all people like you based on this?

Fuck no, you wouldn’t.

Sia responded to criticism with abuse

When asked by autistic actors why she refused to cast an autistic actress, she just…called an autistic actress a bad actress. Not only is this finger-pointing immature, but it’s mean-spirited. And part of Sia’s defensive Twitter strategy has included cupping her hands over her ears and saying that she had the best intentions. Sorry for the low-quality image. Screenshotting, not embedding because I’m anticipating some dirty-deletes from Team Sia.

And when that wasn’t good enough, she lashed out. Sia insulted an #ActuallyAutistic actress on Twitter when faced with legitimate criticism of her work.

I’m not a fan of canceling artists for low-context tweets from years before they were famous, middle school hearsay, or things that were quietly tolerated 50 years ago but not acceptable today (depending on the totality of the circumstances).

But Sia is being held accountable for how she behaved this week. And she is not doing anything to discourage her fans from abusing the autistic people who raise valid criticisms of a work set to be released in early 2021. She has already done harm, but she can still choose to apologize and make amends before she does any further damage.

Will Sia do the right thing, or will she keep insisting that abusing disabled people is her right as an artist?